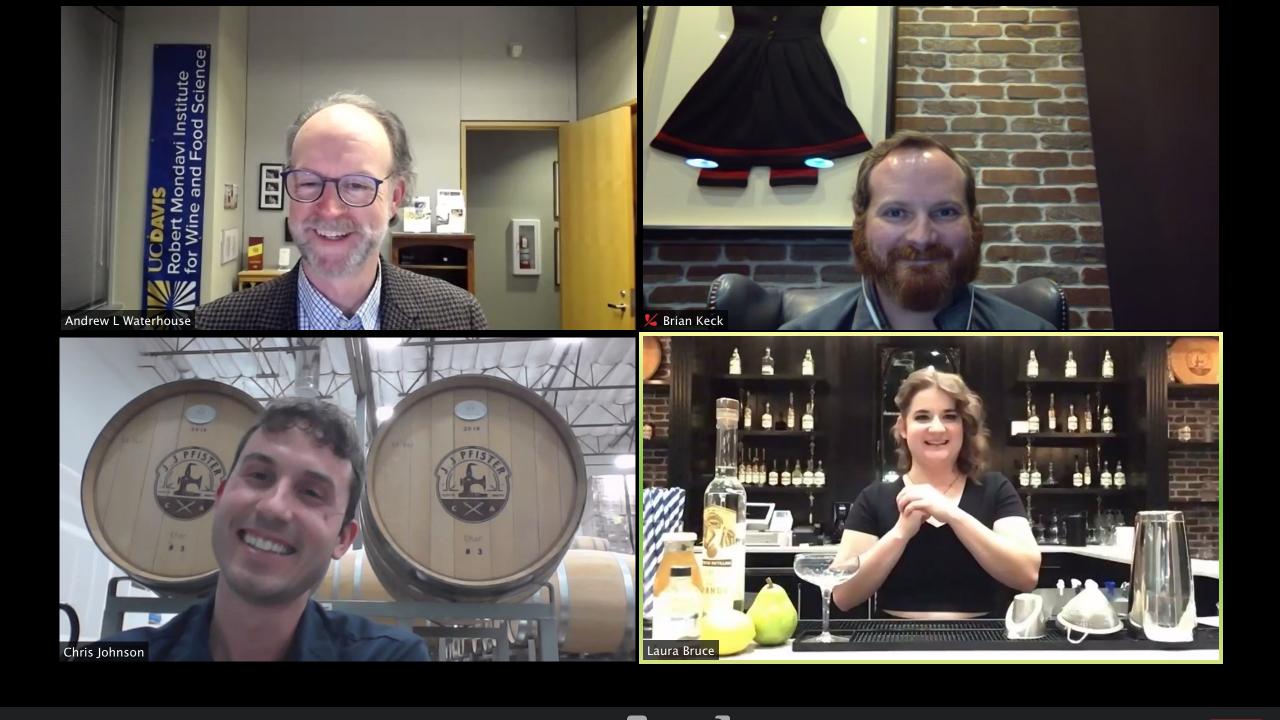 While traditional brandy is distilled with grapes and then aged, fruit brandy—or eau de vie, which translates to “water of life”—is distilled with fruits other than grapes, and promptly bottled to preserve the fruit’s aroma and freshness. Join us for an inside look at eau de vie with distillers and UC Davis alumni Brian Keck and Chris Johnson of J.J. Pfister Distilling in Sacramento. We’ll hear about their time at UC Davis, their approach to making a variety of spirits, and taste J.J. Pfister’s Eau de Vie Unaged Pear Brandy, both neat and in a cocktail.

Brian Keck is J.J. Pfister’s master distiller, where he draws on his extensive background in sensory analysis to create premium, organic spirits, including vodka, gin, rum, and brandy, among others. Before joining J.J. Pfister, he worked in the craft brewing and winemaking industries. He holds a Master of Science in Viticulture and Enology from UC Davis.

Chris Johnson is a distiller at J.J. Pfister, and has a background in wine production and analysis. Before joining J.J. Pfister, he was an enologist at two premier Napa Valley wineries. He holds a Master of Science in Viticulture and Enology from UC Davis.

Laura Bruce is a Sacramento-based bartender who has been active in the Midtown bar scene for five years. She has hosted pop-ups in Manhattan for her craft, as well as traveled to Nashville for extensive training in the whiskey field. She currently works at The Shady Lady Saloon and it’s sister bar, B-Side, and serves as a bar consultant for J.J. Pfister.

We will be tasting J.J. Pfister’s Eau de Vie Unaged Pear Brandy and making a "NorCal Pear Sidecar" cocktail. You can purchase the brandy separately, or as part of a kit with everything you'll need to make the cocktail. Check your email once you register, a discount code for 25% off your order from J.J. Pfister will be in the automated confirmation you receive from Zoom.